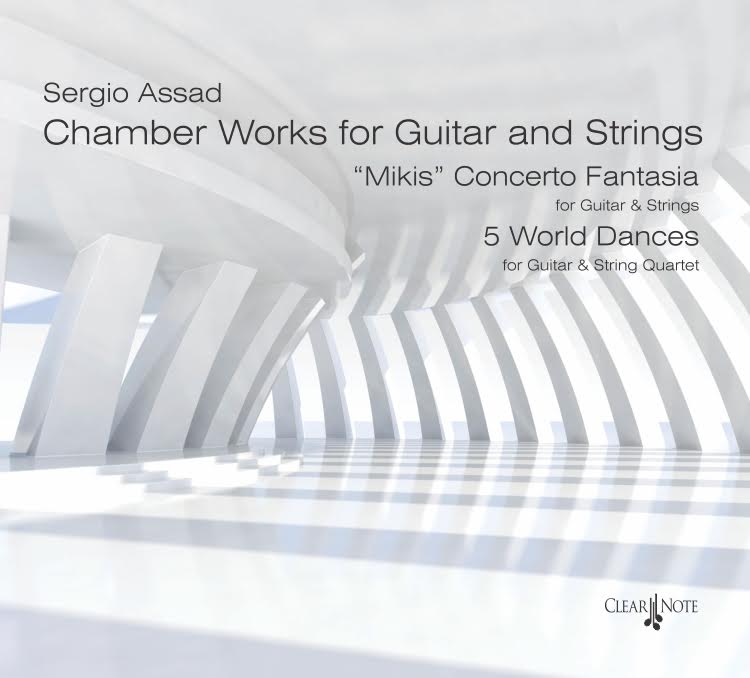 Music: Sergio AssadGuitar: Thanos MitsalasViolin: Simos Papanas, David BogoradViola: Chara SeiraCello: Angelos Liakakis Double-Bass: Yiannis HatzisIt was a great privilege to work with such a talented team of musicians and bring together into life this hauntingly beautiful project. Every performer without a doubt gave their best for this rewarding result. Before all, thank you maestro Sergio for your constant support and integral trust!!!Thanos Mitsalas (http://www.mitsalas.com/) Notes of the composer about the CD:In today’s world, where CDs are so easy to produce, very few recordings stand out above the vast sea of CD’s released every year. It is my great pleasure to introduce one of these very special recordings featuring chamber works for guitar and strings. This extremely well produced CD was recorded and engineered in Thessaloniki, Greece. The artists involved are of the highest caliber with a profound knowledge and understanding of chamber music. The exquisite classical guitarist from Greece Thanos Mitsalas surrounded himself with top Greek string players and recorded this full album dedicated to some of the chamber music that I wrote over the years. You will find here the first recording of the Concerto Fantasia for guitar and strings based on the music of our beloved Greek composer Mikis Theodorakis. Written in 1999, it was commissioned by Costas Cotsiolis and premiered by this great guitarist in Athens with the Athenian String Orchestra. The concerto is written after a collection of pieces that Theodorakis composed under the title Lorca. To create Lorca, a set of songs for guitar, contralto, choir and orchestra, he used a collection of poems written by Federico Garcia Lorca called Romancero Gitano. This work became one his most known pieces and was popularized by the recording of John Williams and Maria Farantouri. The Concerto Fantasia presented in this CD uses Theodorakis’ themes and gives a special role to the guitar part treated in a stylistic concertante way. Formally, the piece is presented as a traditional concerto in three movements each movement using a pair of Theodorakis songs in a total of six. Making an echo to Theodorakis title, Lorca, the concerto fantasia was named Mikis, after the composer’s first name, in a pure and humble homage to his music.The 5 World Dances were commissioned by the Bath International Music Festival in 2001 and were my first pieces for guitar and string quartet. It comprises a set of 5 pieces each one featuring an idiomatic style of music from a different part of the globe. The subtitles reflect those regions: 1)Middle Eastern, 2)Celtic, 3)African, 4)Balkan and 5)Latin American.It is a true honor to have my music so well presented here in this excellent recording!! Enjoy!Sergio Assad