Evangelos Assimakopoulos and his wife Liza Zoe are considered among the finest classical guitar duos of their generation. Since their arrival on the international music scene in 1967, Evangelos & Liza have played duo concerts throughout the world, and appeared with many major orchestras. Segovia regarded them as worthy successors to the Presti-Lagoya Duo and commented, “I cordially wish Evangelos and Liza to conquer the high estimation of the public as they have conquered mine!”

CLASSICAL GUITAR: At what ages did you start playing the guitar?

LIZA: We were both born in 1940 and began playing guitar at the age of 13. We studied with Dimitris Fampas [1921-1996] at the National Conservatory of Athens. At that time the guitar was known mainly as a popular instrument, not a classical one.

EVANGELOS: Fampas was a soloist and teacher who inspired pupils and taught good technique. Such teaching was rare at the time. It was only in August 1950 that Segovia taught for the first time in Siena, Italy, exploring composers, repertory, tone, and all that. Fampas, one of Segovia’s pupils at Siena in 1954, brought all this to his students.

CG: When did you first meet each other?

EVANGELOS: During the ’50s, we met as students in Fampas’s class. He used to organize concerts for his advanced pupils. In 1960–61, we received the first guitar diplomas with honors at the National Conservatory of Athens, recognition of Fampas’ pedagogic abilities.

CG: When did you decide to form a professional duo?

EVANGELOS: At first, we played solo recitals, building independent reputations. This changed when Presti and Lagoya [Ida Presti and Alexandre Lagoya] visited Athens in 1960. This inspired us to change direction. Fampas invited the duo for dinner along with advanced students. We had an opportunity to play for Presti and Lagoya and experience the excitement of hearing them perform. We realized that the guitar duo represented a wider musical canvas.

CG: What are the attractions of duo playing?

LIZA: Cooperation, collaboration, and musical dialogue. There are more options, the music breathes more, technical and musical limitations can more easily be surpassed. There is greater sound production, variety of articulation, and wider range of colors.

CG: What are the special problems of duo playing?

EVANGELOS: Our ideal is to make two guitars sound as one. We spend hours on technically simple musical phrases, on coordination, working on tone, and such things. Also, there is the correlation of interpretive views. A musical phrase spontaneous for the soloist becomes a topic of debate for a duo.

CG: When and where were your first concerts together?

EVANGELOS: In 1960, we performed duo concerts, and in 1963 we played in Athens and other Greek cities mixing solos and duos. These concerts established us as a duo in music and in life. But then we became interested in presenting only duo music, enlarging our program with transcriptions, as well as getting Greek composers to write new works.

CG: Around this time you also studied with the Presti-Lagoya Duo.

LIZA: Yes, in 1964 we got a scholarship at the Presti-Lagoya Summer Academy in Nice, France. The focus for Presti and Lagoya was tone. They played with the right side of the nails. During three summers at the Academy, we heard their tone qualities in concerts. This was the most colorful, bright sound we had ever heard.

CG: And then of course you got married!

LIZA: Yes. Presti and Lagoya were “best man” at our marriage! Their wedding gift was to present us in their concert at Menton [on the Cote d’Azur in France], where we played a program in the first half. All through the years, we had a warm friendship with them, which inspired us in our career. Ida Presti’s death in April 1967 deprived the world of an immensely gifted guitarist.

CG: When did you first meet Segovia?

EVANGELOS: We first met Andrés Segovia in September 1967 in his summer house in Granada, Spain.

LIZA: We had lessons with Segovia for three summers at the Academy of Santiago de Compostela and at his house, Los Olivos, in Herradura, near Granada. In 1969, Segovia gave us a letter of recommendation in which he named us as the world’s best guitar duo and introduced us to guitar festivals as well as to his English agent, Ibbs & Tillet. Above all, he recommended us to his American agent, Sol Hurok, a mighty agency. During these years, we made 19 tours of the United States and Canada, playing hundreds of recitals and concerts with orchestras.

CG: There seemed to be an abundance of concert opportunities in those days.

LIZA:  During the ’70s and ’80s, the classical guitar had a sudden explosion throughout the world. This opened up opportunities for guitarists to give international concert tours and master classes.

CG: Do you think those decades were the best years?

EVANGELOS: Certainly. During the ’70s, the French newspaper Le Mondementioned that every year one million guitars were sold in Europe and another million in the US. We remember the delirium with  [Joaquín Rodrigo’s] Concierto de Aranjuez played by [Narciso] Yepes, and many students came to the National Conservatory, where we were teaching, wanting to learn Recuerdos de la Alhambra or Asturias!

CG: What about the 21st century?

EVANGELOS: Everything has changed. Concert halls used to be packed with audiences enjoying a two-hour program. How many guitar artists today play their one-hour program in packed halls? Nowadays things change so fast that great differences are visible every five years!

LIZA:  We live in a time of speed, a time invaded by computers. This has an effect on music. Today’s guitarists express this state. They play faster, more note-perfect, and more aggressively than earlier players. Fifty years ago, guitarists did not have the velocity nor the same information about music as today’s players. But they had a genuine love for the instrument and embraced the guitar with great affection. One could be touched by their playing.

CG: Can you say anything about your career philosophy?

LIZA:  This word “career” is a fulfillment. We have not pursued our “career” to become trapped in an ill-paced lifestyle. We were never forced to sacrifice our philosophy of life. In 1969, John Duarte suggested that to be at the top we would have to live in London, New York, or Paris. We did not follow it up and we never regretted it. During our career we have made many friends and enjoyed sharing our music, but we also have our family.

EVANGELOS: We have been lucky with audiences. They came to our concerts to listen to chamber music. [Now] audiences go to solo recitals to criticize and censure. So aggressive! Today, many musicians dream of a career, and lead an inhuman life. They shut themselves off, isolated in one room for hours. They push toward their goals with excessive pressure. A career in art is not just a job, it’s a creation. There is no reason for any sacrifice in the name of success or career. These things are the products of creativity, and one derives from the other. If a musician enjoys devotion to music, the main reward is having lived life doing something the person loved. If a guitarist gains recognition, that is even better. 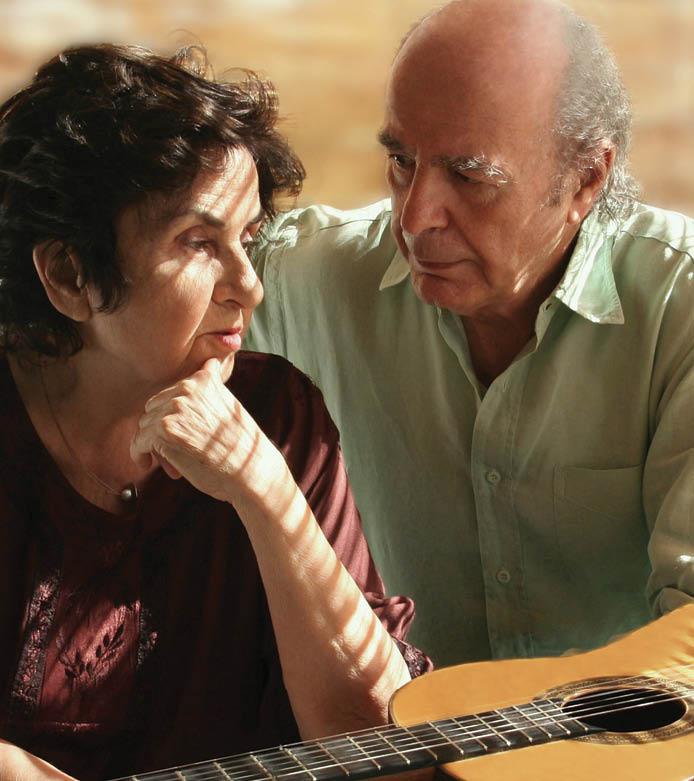 CG: Tell us about the guitar in Greece.

LIZA:  Greece traditionally is a seedbed of guitar. As a people with strong temperament, we love our folk music, songs, and traditional dances. Recently, in spite of the terrible economic situation, there have been many guitar activities. The difference between past and present is the quality. Certainly, the guitar in Greece and everywhere has moved on in both directions, forward and backwards, with effects and side effects.

CG: What changes have you seen in students over the years?

EVANGELOS: I have gained much from my students. A bad pupil is one from whom the teacher has nothing to gain. A student acquires musical concepts from the teacher, and the teacher gains fresh approaches as well as the satisfaction of the ultimate creation. The majority of today’s students don’t have the same love of the guitar. They have better grounding and are more educated but often view the guitar as a means to an occupation. Idealists— real lovers of the guitar—are fewer each year. Today, the majority have little regard for tone quality. They may be influenced by styles of guitar where tone has no importance.

CG: What is your favorite repertoire?

LIZA: We play music of all periods, from the Baroque to the contemporary. In the end, the emphasis is not on different kinds of music—there is simply good or bad music.

CG: When did you first start recording?

EVANGELOS: Our first recording was in 1965, the first Greek classical guitar recording ever. Since then, we have made 16 recordings playing composers of every period, including three concertos.

CG: You recently organized the Patras Guitar Festival. How did that go?

LIZA: This festival started in 1991 in Patras, third largest city in Greece. It has become very successful, attracting 150 students every April. We provide the students with classes, lectures, and recitals from Greek and foreign artists. Thus, there is a guitar fiesta for four whole days and we are really proud of it!