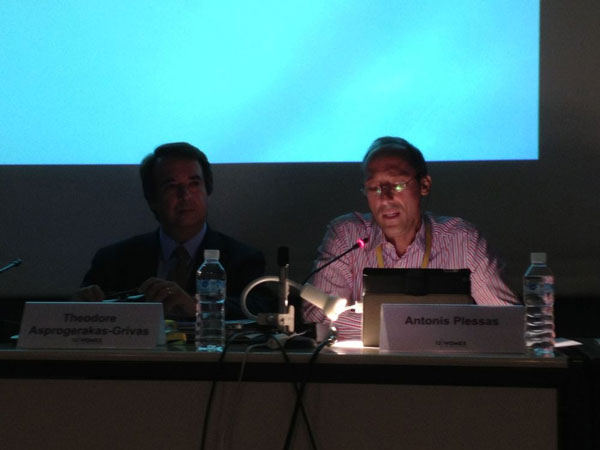 Good morning everyone, My name is Antonis Plessas and its a pleasure being here where the heart of creative expression and passion beat in music’s eternal rhythm.
The most groups in one place he had ever seen as a teenager was twenty bands engaged in a deadly musical battle to the end. The overlapping music styles at that point in time were mind boggling and still that was nothing minutely compared to what was going on last Spring at the South By Southwest music conference and festival where Bruce Springsteen addressed an eager audience.

The records that Bruce’s music was initially released have given way to a cloud of ones and zeroes, and his entire record collection since he was 13 now fits in his breast pocket but one thing remained unchanged over the years and the "Boss" made it abundantly clear:The genesis and power of creativity.
Music is the aural landscape of our lives and unlike other arts it communicates directly with our subconscious. Its power transcends national, religious, ideological, cultural or heritage boundaries, and captivates the emotions of a universal audience.

A decade ago there was no iPod, YouTube, Myspace, Facebook or Apple iTunes store. The traditional music industry has been utterly ripped apart by the impact of technology and social media. The Internet has created a seismic shift in many facets of the music industry and consumers experience of music was changed by the digital age. Most of what we take for granted in the music business today is brand new and a decade from now, the industry will be very different than it is today.

Music is now available in more places than ever before. Demand for all its forms is multiplying with every iPod and cell phone sold, every new TV show or game that debuts and every new technology platform that’s developed.

Technological developments of recent decades revolutionized and democratized the process of music creation and production. Nowadays a vast array of tools and services covering every imaginable application are available to help musicians promote, distribute and sell their music. The public wants access to music of their choice through a growing number of ways, means and formats.

If technology has leveled the playing field to the point that musicians can “do it all themselves” one might wonder? Why sign with a record label when it’s cheap and easy to get your music on iTunes? Why hire a publicist when you’ve got Twitter? Who needs a booking agent when you can create a following on YouTube?

While it’s fair to say that musicians’ access to the marketplace has greatly improved when compared with the music industry of yore, with its bottlenecks and gatekeepers one has to carefully balance and evaluate various parameters before reaching a decision. Can really a creator function as his own publisher, manager, booking agent, attorney, publicist, social marketing manager and technologist and still find the time and energy to create music?

We live in a networked society where everything is interconnected. In this new ecosystem we can’t exist by ourselves and the idea that we could by controlling production, marketing and distribution as we used to, proves to be a dangerous illusion. The idea of not licensing and being part of all sorts of collaborations with brands, telecoms, device makers and advertisers is one that we can't afford. We have to give permission to try things and keep in mind that if we ask too early for too much we risk killing innovation.

In our digitally connected world options abound and "getting distribution" is no longer a challenge. Now it's a matter of "getting heard." How do you cut through the clutter and reach an audience? How can you make your ding in the musical universe where millions of aspiring creators and artists compete around the clock for the holy grail of the audience's attention?

Indie labels, aggregators, distributors and the majors around the world release 100,000 old and new digital tracks every week and that’s in addition to the already existing rights-managed catalog of digital music that now surpasses 22 Million tracks. Releasing new music these days and attracting attention can be a daunting task. In our continuously hyper-connected world, attracting and sustaining public´s attention and winning its trust are prerequisites for reassuring a seat in the competition.

Music business is transformed into a service business that commodifies, packages, and markets experiences as opposed to physical products or services. It's about just-in-time customized delivery. Music as service, not product. There’s an urgent need to expand existing compensation systems and make sure that our music income comes from many different sources. In what ever we do we must make sure we remove the hurdles.

We must ensure that there are no obstacles, remove all kinds of variations of why one thing or the other doesn’t work or isn’t available or accessible. There’s a new reality expressed by consumer's demands of how they want to listen to music, when and where and we have to adapt and face the growing pains in terms of monetizing those changes.

In addition to all known channels of promotion today’s environment allows artists to explore channels of communication with an audience outside the mainstream. The times do call for creative focus and artists are increasingly looking for new ways to exploit all rights as a brand.

In the last few years more and more companies outside the orbit of the traditional music business, have spearheaded successful initiatives in the music space. Apple, Amazon, and Google launched recently their music in the cloud services.
Mountain Dew started a record label. So did Red Bull, Toyota, Starbucks, Yamaha and others. There is no better way to create an emotional connection with your customers than through music and these companies know that.

How consumers discover music, purchase music, and experience music have become much more decentralized; and as such, the means to effectively market music has shifted as well. Traditional marketing vehicles, while still important, have been augmented with a variety of online-based marketing, sales, and distribution outlets, which all require their own specific marketing approaches and techniques.
Today the content moves to the cloud, we use software to access it and the connection of the crowd and the cloud presents us with more revenue streams and promotional avenues than before.

The new players in this business of music are the ones that make the connection between the cloud and the crowd.. To deal with this ever increasing flood of information that’s produced from mass customization we need new tools that will allow us to give meaning to the chaos created by almost unlimited choice. After all we must not forget that people pay for good content that is also curated and for the new generations to get involved we must provide interaction.

Online platforms for blogging, streaming video, making friends and tweeting activities are considered the bread and butter for establishing an online presence. “Punk cabaret” artist Amanda Palmer is one of music’s most productive users of social media. She has opened herself up to her fans, intimately and unconventionally, to cultivate her career soliciting creative feedback from more than 654,00 followers and selling tens of thousands of dollars of merchandise in flash sales.

She recently celebrated the nearly $1.2 million dollars she has raised in a month long campaign for her new album “Theater Is Evil,” on the crowd funding site Kickstarter, with 25,000 fans making contributions ranging from $1 to download the album to $10,000 for a private dinner.

One of the best ways to promote any kind of repertory through digital media is to give the audience the chance to co-create. It could be a concept the artist presented, selective material from an ongoing production or even a finished work.

Equally important with choosing the right tools to finance a music production is the selection of a distribution partner and platform.
Self-released recording artists or labels looking to offer out their catalogue can choose among various distribution methods and select the one that best fits their needs. Choices vary among free-distribution, free-distribution with "paid" options and paid-distribution.
What do Avery, Dondria, Andy McKee, Alex Goot and Boyce Avenue have in common? They all are young talented wannabes who found fame by uploading their
videos on youtube. These online video-grown phenoms ascended to national touring acts and received multiple music placement opportunities as a result of their newfound visibility.
YouTube provides independent artists with better footing to compete with mainstream artists and find an audience. In addition online video is often supported by advertising revenue, sponsorship money and subscription fees.

Rock Band and Guitar Hero are two great games which sold together more than 38 million units. The successes of applications such as Smule's "I Am T-Pain"  and Tap Tap Revenge shows beyond doubt that the app world has proven just as successful at integrating music as their console counterparts.

Reaching an audience of over 100 million listeners on a daily basis is no small feat. Music creates an environment that enhances customer experience and sales and  background music services provide content curating expertise suitable for every venue along with the legal clearances necessary to play music in various establishments

In today’s globalized markets and in the midst of a prolonged economic crisis is the existence of local repertories threatened by the dominance of the Anglo-American one? Responsibility for their promotion should be left in the hands of companies and individuals producing it or should governments under certain conditions take initiatives to facilitate it as well?
To answer such a question one would have to  carefully study data and facts provided from thoroughly researching the evolving landscape in local markets of interest.
To the best of my knowledge such a research hasn't been conducted from accredited institutions in our country and for that reason I can't provide you with an educated opinion.

Artists and companies and brands try new things and succeed or fail, at a time when we all continue to wrap our heads, hearts and wallets around a world in which music isn't an object or even a possession anymore.

What all of these changes will mean for our material and emotional investment in music remains to be seen. The good thing about radical change is that, during those times, the little person has a chance to make a big difference.

Thank you for your presence.